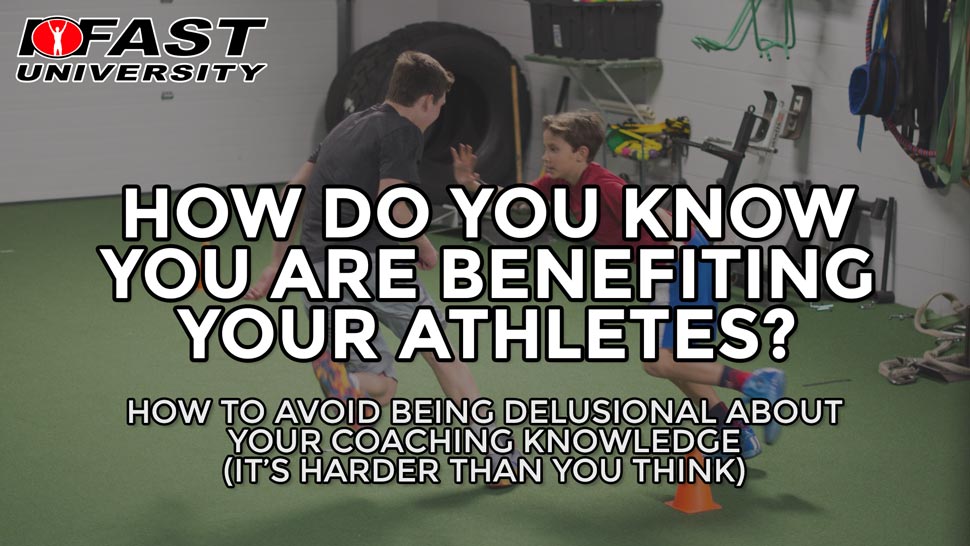 We are prone to lying to ourselves.

This makes coaching difficult. How do you know you are benefiting your athletes?

The human mind is easily fooled, ESPECIALLY by itself, and it gets confused through a ton of different “cognitive biases”.

In this article, we’re going to hone in your critical thinking skills and discuss…

It’s easy to be delusional. When I first started coaching clients in 2008, I thought I knew everything. I had been teaching martial arts for a number of years, so that made me an expert in biomechanics, right? And to be fair, I had seemingly good results. Clients got stronger. Their back pain went away. They looked decades younger. I had a client lose 40 lbs.

A few years later, dealing with some nagging injuries, I became a client at IFAST. Within a few workouts, I realized that I was so ignorant, I didn’t even know what I didn’t know. At IFAST, my coach showed me some exercises I had never done before: split squats, half-kneeling cable presses. Even worse, they were showing me that I didn’t know how to do seemingly easy exercises: push-ups, goblet squats. Before, I was proud of my ability to do 20, 30, 40 push-ups in a row. Now, with the correct form, I was barely able to do eight before my core gave out.

There are a number of factors that make the fitness industry particularly vulnerable to the temptations of self-delusion:

Take any untrained novice, and put them on any program, and they will improve. They’ll get stronger, lose fat, gain endurance, feel better, look better. It doesn’t matter what you do. CrossFit, Starting Strength, StrongLifts, P90X, YoPi, hula hooping, Zumba, or any random combination of reps and sets and exercises. The client improves for several weeks, and then either loses interest or gets injured. If the client sticks around long enough, they’ll hit a plateau, but it may be a while before the plateau kicks in, depending on how detrained they were to begin with. Even when that plateau hits, it’s easy to blame the client. Maybe they’re not trying hard enough, or eating right, or sleeping enough.

Those that work in professional or collegiate sports know that there are many, many highly paid strength coaches who are doing some highly questionable things out there.

It’s easy to look like a great strength coach when you have some of the finest genetic specimens walking through your door. You really don’t have to do much, except not screw them up.

(I once heard a strength coach say, “I’m not sure how much we matter.” This is from one of the smartest coaches I’ve met, and one who works with multi-million dollar athletes. He was referring partly to the fact that the demands of the sport season make it hard to significantly impact his players. But he was also musing that some of his players are genetically gifted and train far less than some of his hard-working athletes, but have better stats. What can you do about that? Not much.)

Even when the athlete gets injured, it’s rarely the strength coach who is blamed. It’s usually the schedule, or genetics, or the athlete’s work ethic.

Some of these highly successful coaches know less than you do about programming and coaching, but they do know a lot about networking and managing personalities. But they are regarded as “successful” because they work with famous athletes and because their athletes perform well.

The complexity of the human body.

I took a job at a different gym for a few months before I was eventually hired at IFAST. When I came back to IFAST, I was surprised to see a large number of exercises that I hadn’t encountered during my 4-month internship. Mike and Bill had already discarded many exercises that they now considered out-of-date, and adopted or created new ones, based on their latest understanding of training science.

Our understanding of biomechanics, neurology, psychology, physiology changes every day. If you look back at your programming and coaching from five years ago, and it doesn’t cause you to wince, you’re either way ahead of everybody else, or you haven’t learned enough. There’s a tiny probability of the former, and a large probability of the latter.

Perhaps you are doing all the right things, but your understanding of the reasons is inaccurate. This may be the most common of the errors you can make, since cause-and-effect is surprisingly difficult to understand correctly.

Finally, perhaps you are doing all the wrong things, but your clients and athletes are improving anyway. This can be due to the novice effect. Or maybe you are simply inflicting less harm than your athlete’s previous coach was doing. In simple language, this is known as “We are doing fewer stupid things than the other coaches are.” In fact, that’s my unofficial motto: “We do less stupid shit.”

So given that there are all these ways to be wrong, what can you do about it?

The only things you can really do about it are:

This was one of our free articles! If you’d like to read more stuff like this, watch over 100 videos on coaching, join our private discussion forum with hundreds of other professionals from around the world, and have the ability to post comments, then become a member!

Let's have a discussion Cancel reply

This site uses Akismet to reduce spam. Learn how your comment data is processed.

Most popular posts this month

What do you want to learn?